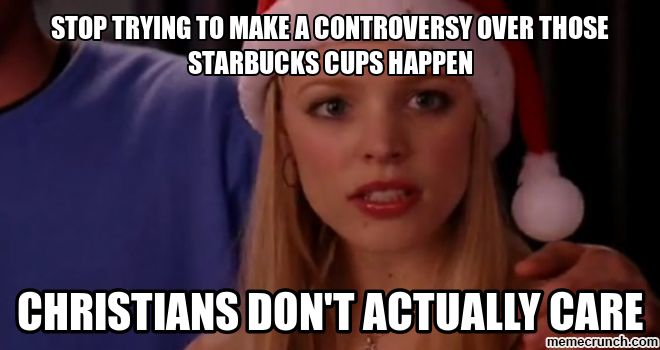 Now, can we quit talking about it?

If you’re like me, your news feed has been lit up in the past 48 hours about this issue. I will be brief.

Through the various pages and accounts I manage, I have access to about 20,000 friends/fans/followers online. Most of the people in that group are Christians, and while that is a relatively small number in comparison to the whole internet, I would argue that it still represents an accurate sampling of the evangelical church and it is far more than required for a scientific study. In this crowd I have not seen a single person – not one – actually say that they are upset about the Starbucks cup.

But, oh boy, I’ve heard about the cup. Everyone, christian and non-Christian, is outraged over the total idiocy/hypocrisy/Pharisaical nature of these hoards of “Christian” fools who are supposedly saying that Starbucks’ removal of snowflakes and ice skates from their red cup is somehow getting away from the true meaning of Christmas. (Which is snowflakes apparently, who knew?)

So where did it come from then?

It started last week when a conservative news site (I’m choosing not to post the link on purpose to not give them any more traffic) known for its huge sweeping over-statements posted something about how the move to a solid red cup away from last year’s snow flake design is some how a sign of impending doom for Bible-believing Christians who want to say “Merry Christmas” without getting pepper sprayed in the face.

This article would’ve gone on without any notice except a few news sites got hold of it and turned it into a story about how Christians are upset about something stupid again! It’s almost like the whole internet makes money based off of how many clicks it can get on crazy, inflammatory headlines…

The source most of the internet probably heard it from was Buzzfeed, that bastion of journalistic accuracy. Buzzfeed posted a link to the original article and five tweets – FIVE TWEETS – by angry Christians some of whom clearly had little understanding of what was happening as it seemed like they may have thought Starbucks was a former Christian denomination that had fallen from grace, based off these tweets.

Yes I’m sure there were many more than five to be found elsewhere and yes there are many more now, but I was amazed when I found the buzzfeed article. I was sure there would be HUNDREDS of angry tweets about the red cup based on the backlash. But no, turns out this “controversy” didn’t have much of a movement behind it at that point. This article only served as fuel for the fire and anything else – on either side – has grown from there.

You hadn’t heard about this last Thursday had you? No? Because the initial article had been up since early Wednesday morning. No one cared before this whole thing turned into clickbait. (Update: Some have said that it started with the youtube video of the guy talking about it, or by Donald trump. Both of those were responses to the original article, as they were posted 4 days later, the day after the buzzfeed article.)

This disproves Newton’s third law, you know, that says every action will have an opposite but equal reaction, because the initial action was some yellow journalism on an obscure, foreign site. The reaction has been to fill my feed with pictures of the red cups that could stretch around the planet twice.

So what I’m saying is this: we need to get NASA involved because this kind of controversy could be the breakthrough we need to get to Mars! It only takes a tiny little bit of “controversy” to fuel an enormous reaction.

So let’s quit calling this vast minority of people idiots and get back to what we should really celebrate this December – the new Star Wars movie.