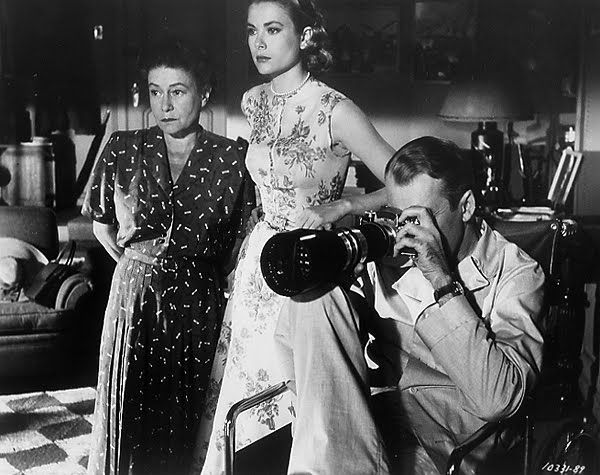 Rear window isn’t a perfect movie, but it is darn close. This is another one that I was embarrassed to say that I’d never watched before. I was very familiar with it and I’d probably seen about half the movie watching various documentaries and youtube videos talking about the greatest films, and there is no doubt that this one deserves to part of any list of the greatest American movies.

I don’t want to oversell it, but it is so unique, so unmarred by its age, so beautifully shot, it’s hard to ignore the brilliance of the film. If you’re not familiar with it the film takes place entirely in one room, but the story is happening in the surrounding apartments. Jimmy Stewart plays Jeff, a photographer who is laid up in his apartment after breaking his leg. In an era before air conditioning and netflix he has no choice but to entertain himself by watching his neighbors in the surrounding buildings who all leave their windows open. He has nicknamed several of the characters and becomes increasingly involved in their daily activities. Eventually he becomes concerned at the suspicious activities of one of his neighbors whose wife is suddenly no longer present.

The brilliance of the film is the fact that while the story is taking place around the neighborhood and beyond, the entire film takes place from the perspective of the main character who never leaves his living room. Despite this we have a compelling a-plot, coupled with a love story, and several sub plots – all told visually as he looks in on various neighbors and gets snippets of their life. There is almost no score throughout the film – instead you’re allowed to feel the eerie calm that comes with being unsure about one of your neighbors being a vicious murderer. There is only natural sound – which often includes the sounds of one of the neighbors playing piano – a happy sound that is often dissonant with the feeling that the lead character is experiencing.

This is such a different film that everything that is similar would be considered derivative, which is why any aspiring filmmaker both loves it and hates it. It represents a spent idea that can be rehashed only as a tribute, and it has many times. It’s one of the standard episodes of a long-running show. It is fun to see Castle‘s take on it. I recently stumbled across Family Guy‘s tribute to the classic film. Once you’ve become a plot that people mimic repeatedly, you know you’re a classic film.