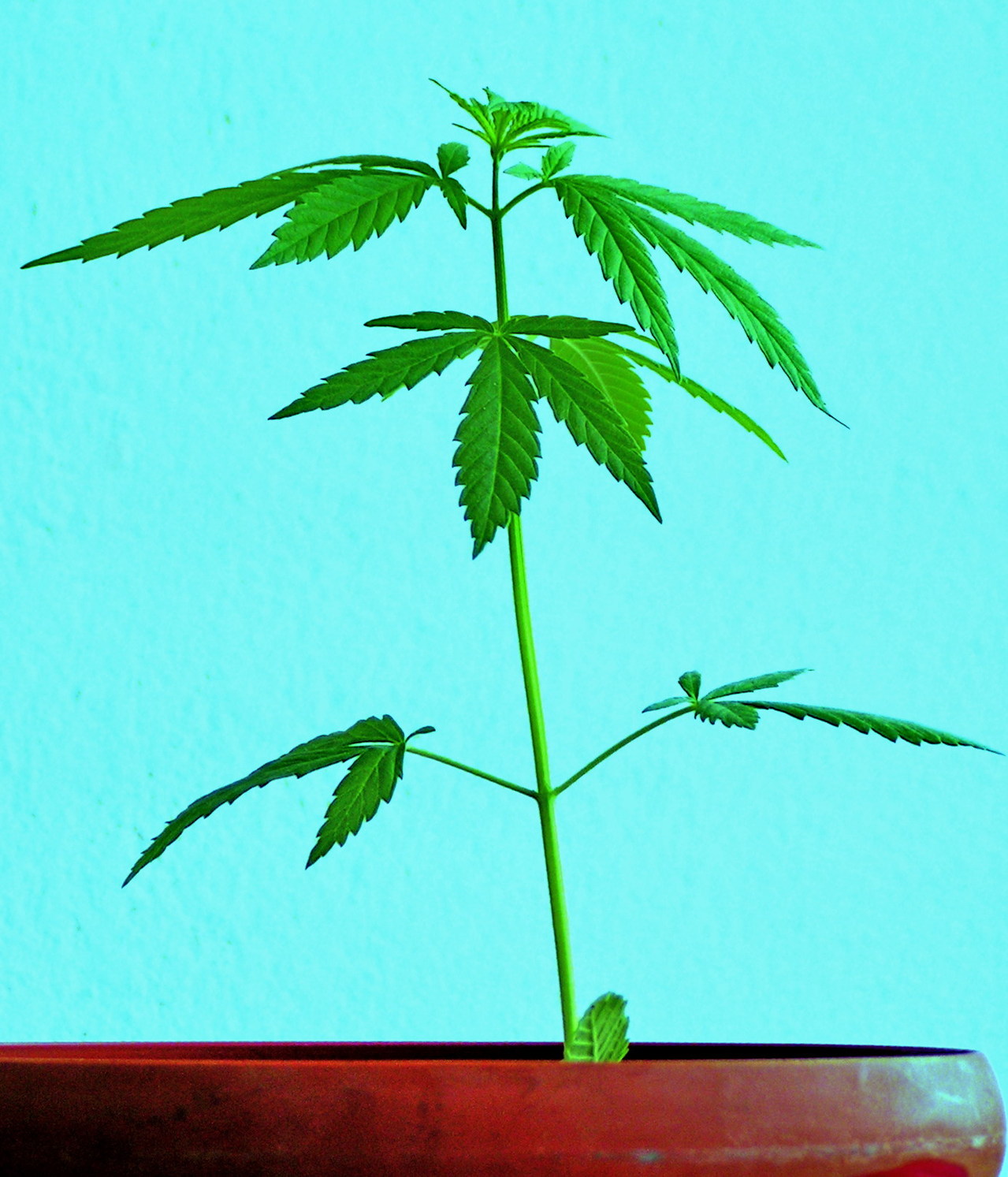 There’s been a lot of discussion about whether or not Christians should smoke Weed.

There are already several great articles on what the Christian position on Pot should be. Mark Driscoll wrote one here. Here’s another one from Relevant Magazine. And here’s my personal favorite from Christianity today, which unfortunately requires a subscription to read the whole thing. But that’s not what I’m here to do. I just want to approach this purely from a logical standpoint.

After the first few months of legalized recreational use of marijuana in colorado there was a series of articles explaining all the great things about pot. There were articles explaining that it’s not so bad, because the crime rate hasn’t gone up, but in fact it’s technically gone down because all the people smoking illegally before are smoking legally now. And there wasn’t an increase in violent crime, robberies, or any other type of crime related to smoking the doob. Then of course there’s the article that tells us that weed has brought in over $25 Million in tax revenue to date. Then there was the study that told us that cannabis consumption hasn’t increased significantly since the legalization. So again, it’s not that bad.

This is all supposed to lull us into feeling ok about the fact that people are toking up and it is now legal and increasingly socially acceptable. All the while more and more people seem to be saying that it’s better than other drugs used and circulated legally. After all, there have been studies that show weed to be less damaging to the lungs than cigarettes. It’s predicted to be less addictive than alcohol. Though in that same article, they mention that it has also been shown to create intense withdrawal symptoms “including insomnia, nausea, and anxiety.” Despite all this, many of these articles spend more time telling us about how “ok” smoking juju really is.

Very few of these articles ever talk about the effects THC has on the brain. This is partially because only now are the studies really starting to come out. Let’s think about that for a moment. It can take decades of research for a new medicinal drug to go from tests, to trials, to prescription only, before it can finally land at the easy-access of  being over the counter where any adult can buy it. By that time the drug has been taken my millions of people under the watch of a doctor who is obliged to report any unusual reactions. But Colorado just legalized a drug for recreational use by anyone that we’re only now just beginning to research thoroughly.

The best thing that can be said in an article from the National Institute of Drug Abuse is “Our understanding of marijuana’s long-term brain effects is limited.” though later on the article admits, “a person’s risk of heart attack during the first hour after smoking marijuana is four times his or her usual risk” and listed in the persistent and long-term effects of Marijuana are learning impairment, schizophrenia, and increased risk of something called amotivational syndrome, which is exactly what it sounds like.

This is what really concerns me and very few people are paying attention. In a 2014 study, Harvard scientists found that even a small amount of pot on a weekly basis has a significant impact on the smoker’s brain. From this article:

The 20 people in the “marijuana group” of the study smoked four times a week on average; seven only smoked once a week. Those in the control group did not smoke at all.

“We looked specifically at people who have no adverse impacts from marijuana — no problems with work, school, the law, relationships, no addiction issues,” said Hans Breiter, another co-author of the study.

Using three different neuroimaging techniques, researchers then looked at the nucleus accumbens and the amygdala of the participants. These areas are responsible for gauging the benefit or loss of doing certain things, and providing feelings of reward for pleasurable activities such as food, sex and social interactions.

“This is a part of the brain that you absolutely never ever want to touch,” said Breiter. “I don’t want to say that these are magical parts of the brain — they are all important. But these are fundamental in terms of what people find pleasurable in the world and assessing that against the bad things.”

Shockingly, every single person in the marijuana group, including those who only smoked once a week, had noticeable abnormalities, with the nucleus accumbens and the amygdala showing changes in density, volume and shape. Those who smoked more had more significant variations.

Critics will say that their sample size is very small, which would be a more valid argument if it weren’t for the fact that ALL of the weed smokers had significant changes in their brain no matter the amount they smokes. The researchers have said that they intend to repeat the study with a larger sample size, focusing on the behavioral changes that can be expected based on these physical effects.

So when people say that crime hasn’t really gone up, that the addiction rate is lower than alcohol, that there’s less of risk for cancer and other diseases common with cigarettes – they’re missing the issue. Because the truth about marijuana is much scarier. My concern isn’t that people are getting high and may do something foolish, or even that they’re harming their lungs. Emerging research suggests that  by smoking marijuana people are willingly eroding their own brain tissue. And there is an increasing number of people and leaders who are endorsing the legalization of a drug that relaxes, giving a pleasant high feeling, but literally reduces your brain power every time you smoke it. 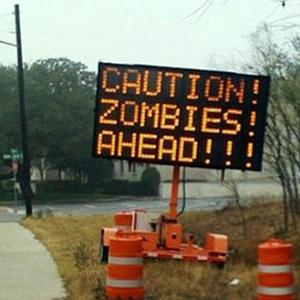 This funny thing is that we’re basically bringing about the Zombie apocalypse voluntarily. And these are people who can vote. That’s what terrifies me.

I’m not worried that we’re going to have an increased amount of THC related DUIs or crimes. I’m more concerned that we’re going to have a decreased amount of motivation and brain power in regards to the big issues that plague our country and that we the people, who are supposed to be stewards of our freedom, are going to use that freedom to get baked and slowly lose our freedom to voluntary brain damage. 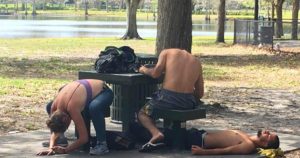 Here’s the kicker: because I haven’t tried it, I’m often told that I don’t have a right to comment on it. It’s true that I haven’t tried it. I also haven’t tried hemlock, bleach, hydrogen peroxide, most kinds of molds, or arsenic. If any politician took a platform encouraging people to ingest any of those very legal substances, everyone would know that he was an idiot. But an endorsement of THC, a largely untested drug, (that when tested has been shown to destroy part of the brain) is a desirable platform for politician today. In fact, if a late night comedian were to summarize my position on pot as a part of a set-up to a joke it would elicit boo’s from the audience while the opposing view would garner cheers.

Why are people so happy to give away part of their brain? The late David Foster Wallace, author and thinker, said

“Think of the old cliché about quote the mind being an excellent servant but a terrible master. This, like many clichés, so lame and unexciting on the surface, actually expresses a great and terrible truth. It is not the least bit coincidental that adults who commit suicide with firearms almost always shoot themselves in: the head. They shoot the terrible master. And the truth is that most of these suicides are actually dead long before they pull the trigger.”

When YOU are the greatest thing in your world, when your mind is the height of your own existence, then your existence is bound to be a sad, angry, frustrated one. We’re unhappy with our lives and are looking for the spiritual fulfillment from something. Getting high and destroying part of our brain is the ultimate way most of us can escape the reminder that we’re not fulfilled. If we kill enough brain cells maybe we’ll stop having to think about our unhappiness at all.

But it doesn’t matter what I think. It doesn’t matter what worldview I subscribe to. As a voter, as a human, as a part of this planet earth, you should be concerned about this. Unless you just like the idea of our world being lured into an increasingly illogical state, fueled by our desire for a series of temporary highs. Sedated into weary nothingness.

“So the final conclusion would surely be that whereas other civilizations have been brought down by attacks of barbarians from without, ours had the unique distinction of training its own destroyers at its own educational institutions, and then providing them with facilities for propagating their destructive ideology far and wide, all at the public expense. Thus did Western Man decide to abolish himself, creating his own boredom out of his own affluence, his own vulnerability out of his own strength, his own impotence out of his own erotomania, himself blowing the trumpet that brought the walls of his own city tumbling down, and having convinced himself that he was too numerous, labored with pill and scalpel and syringe to make himself fewer. Until at last, having educated himself into imbecility, and polluted and drugged himself into stupefaction, he keeled over–a weary, battered old brontosaurus–and became extinct.” – Malcolm Muggeridge

We have to fight this. One of the most common questions I’ve seen people ask those of us who uphold to a moral standard is this: Why do you care? Why do you care what I do? It’s not harming you. There are other sins you could be worrying about that are worse. Why care? . . . I confess it would be easier to simply ignore this. Let people just smoke themselves into oblivion. But we’re not called to that. We’re called to serve, we’re called to bring the truth of Christ into a dark world. We care because Christ cares. We care because he died for all of humanity.

Consider all this in your discussions about the topic.