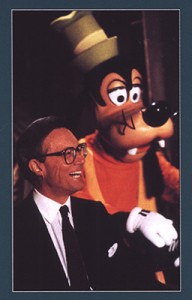 Michael Eisner, Ted Turner, Steven Spielberg and Frank Wells. Wait – Frank Wells, Who’s he? You’re probably wondering why he belongs among such famous execs; he was among them, one of the most successful studio executives of the past twenty years even though, you probably hadn’t heard of him until now.

Frank Wells was the Chief Operating Officer and President of the Walt Disney Company from 1984 until his untimely death in 1994. During those years he worked alongside Michael Eisner to make Disney the most profitable entertainment company in the world, but we’ve never heard of him. According to Disney.com:

“During his 10-year-tenure, Disney enjoyed unprecedented growth and revitalization with annual revenues up from $1.5 billion to $8.5 billion. Disney stocks increased a whopping 1,500 percent, while its theme parks and resorts revenues tripled. Disney Consumer Products revenues rose 13-fold, while its filmed entertainment revenues jumped 15-fold. Frank helped make Disney one of the most successful film studios in the world.”

Frank received a BA at Oxford University as a Rhodes scholar in 1953. As a young man he had the fortune of meeting Roy E. Disney who would later recruit him to his position at the Walt Disney Company. By the late 60′s he was junior executive with Warner Brothers, eventually working his way up the ladder to Vice Chairmen in the early 80′s.

In 1984 Roy E. Disney started his first “Save Disney War” which ended in the ousting of Ron Miller, the CEO of the failing company. Michael Eisenberg took over as CEO of the company, but Roy knew that equally important was the position of President and COO. This person who would keep the practical end of the company running, much like his father Roy O. Disney had, just over a decade earlier. For this task, Roy asked Frank Wells to join Disney.

If you’re a mountain climbing enthusiast (and really, who isn’t?) you would’ve heard of Dick Bass, who wrote a book, The Seven Summits. Bass successfully climbed each continent’s tallest mountain including Everest. Bass was a businessman and his partner in this venture was none other than Frank Wells. Wells completed six of the seven summits, climbing all but Everest because of bad weather while he was camped at the base. He did this all in one year right before joining the Disney family, which placed him in the limelight in a way he never had been before.

In the 2009 documentary Waking Sleeping Beauty, it’s made clear that the media wanted to paint Eisner as the maverick visionary and Wells as the straight-laced numbers man. In reality, Wells was both the maverick and accountant. Eisner was more concerned with the bottom line than the soul of the company; when he hired Jeffrey Katzenberg, Eisner simply pointed toward the animation building and said to him “That’s your problem.” This was a bit of an insult to Roy E. Disney who had asked Eisner for the Animation division to fall under him. 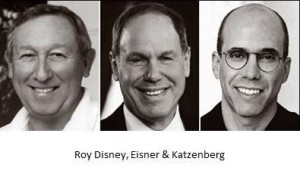 Katzenberg was the visionary that pushed animation to make great movies like the Little Mermaid, Aladdin and The Lion King. Eisner was the CEO and the face of the company as it found new success with these new animation classics. Roy was the heir to the Disney throne if there was any. Between these three talented men there was considerable amount of ego and Frank Wells was the mediator. Proof of his importance to the company came with his death in 1994 which resulted in Katzenberg leaving the company to co-found Dreamworks. It also began the chain reaction that resulted in the ousting of Eisner by Roy Disney.

Frank believed in staying in the background. He wasn’t afraid of the spotlight, he just didn’t need it. Several workers in the animation department regarded him as both an avuncular moderator and a shrewd businessman. He was known for being quick and to the point, often asking questions and only giving a few moments for the person to come up with an answer, moving on to the next person after a few short seconds if they couldn’t answer him. He was known for having a good sense of humor, taking a pie in the face for one in-house video shot with Eisner. But above all, he never allowed pride to interfere with him serving his company. He was more interested in giving to others.

Let each of you look not only to his own interests, but also to the interests of others. Philippians 2:4

Would that we all took the same philosophy in our calling; to be adventurous yet grounded, to be hardworking, yet gracious, to be confident yet humble. What a great example of what Christian leaders are called to be.

If I’m honest, I’m probably more like Eisner, Roy or Katzenberg, wanting to do right by the company, but also wanting my way. That’s why I find Frank so inspiring: he did what was best for the company in a way that the rest of them weren’t willing to, yet he stayed backstage and was barely recognized by the public.

Finally, all of you, have unity of mind, sympathy, brotherly love, a tender heart, and a humble mind. 1 Peter 3:8 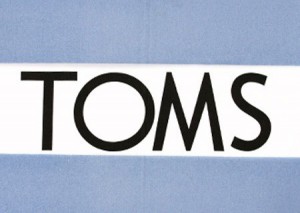