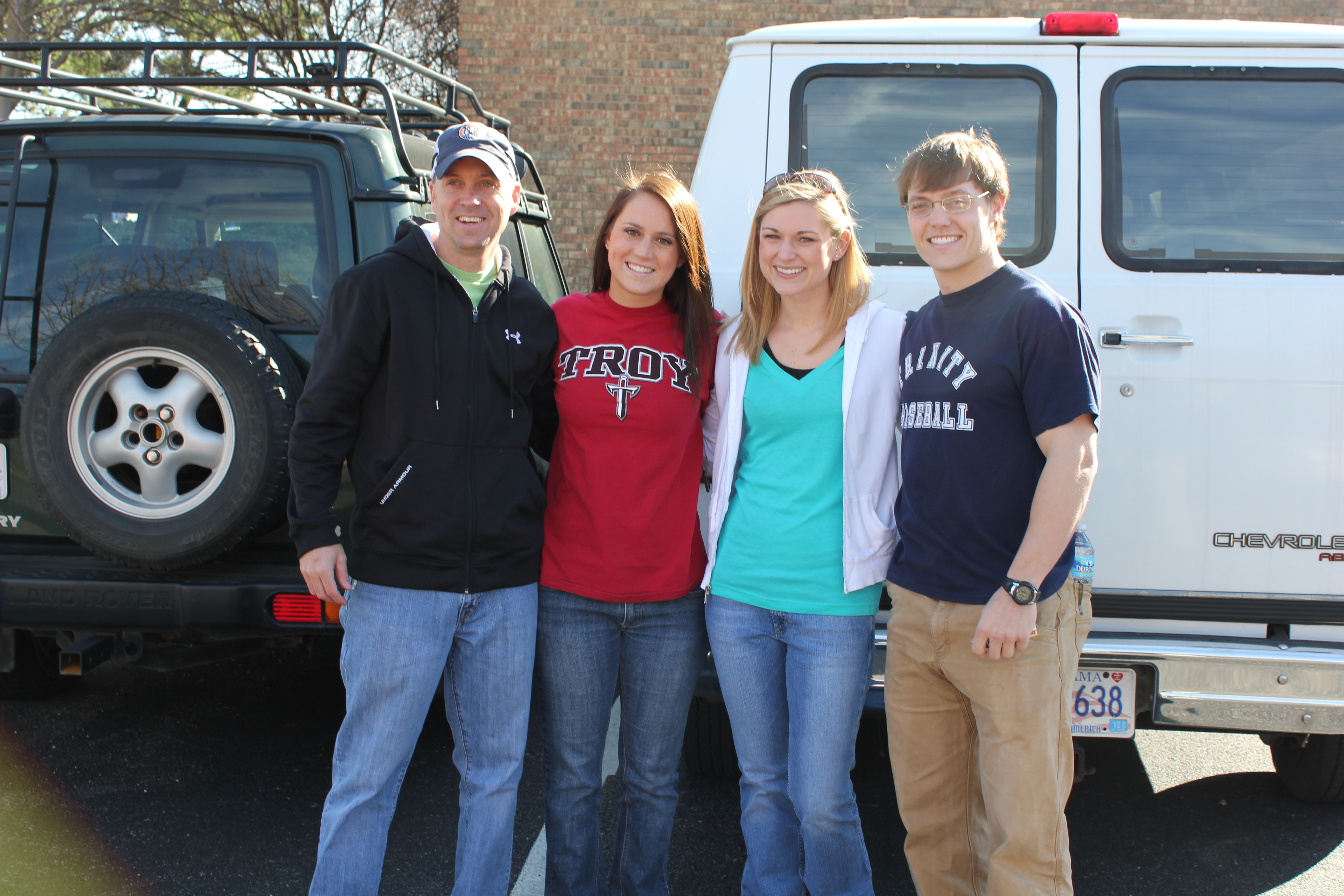 Bonju everyone! It is a beautiful morning here in Port Au Prince at the New Life Children’s home. I’m taking a pause to write a little bit about the jounry thus far.

This team’s trip actually started on saturday with a drive to Ft. Lauderdale to deliver a Land Rover and Frazer’s eldest church van to the port to be shipped over here via – well, ship – arriving later on next month. I was not with them during that leg of the journey which is unfortunate because it was by far one of the most interesting pre-trip trips so far. The key to the land rover included (as many modern keys do) a chip to inform the car that it was not being stolen when the ignition is cranked. Unfortunately this part of the key fell apart halfway down to their destination. The assembly broke off along with two tiny parts of said chip. Between the engineering genius of Woody Parramore and the mechanical expertise of DC Cole, after 40 minutes – and the generous donation of tinfoil from a local Dunkin Donuts – they were able to get the car up and running again.

In addition they had trouble finding a hotel to stay for the night on saturday and when they finally found a place with a vacancy it was truly only a single vacancy so Keri Ward and Elizabeth Beaird slept in the room while the guys slept in the church Van. Because of the broken key they had to first visit a Land Rover dealership before they could call it a night on sunday. Finally they made their way to Haiti on Monday morning where they met up with Kyle and visited the old deal camp first thing in the morning. I joined them that afternoon.

I had a very different Monday morning. Like the others I awoke at Dark:30 in the morning only my drive was to Atlanta to drop off the car that we would be riding home in on saturday from the airport. The day of travel was pretty smooth and I was very happy to find that everything I was bringing to Kyle indeed arrived safely in Port Au prince. This included about 10 books, two packages of coffee, three packages of coffee creamer, two drink cozies from the tipping point, several smaller odds and ends and (dah,dah, dah-dah) a laser printer with extra toner. Yes ladies and gentlemen Kyle can now print. You don’t realize how big a deal it is to have something as simple as a decent printer down here until you don’t have one.

I was expecting to ride to new life with Naz, the orphanage’s hired chauffeur, but as I battled my way through the crowd of haitians begging to take my luggage I was met by Keri and Kyle who brought me over to a small pickup truck – our chariot for the week. Woody, DC and Elizabeth were  standing in the back ‘shouting’ my name sign as I approached. For those of you just joining our program my name sign, given to me by the deaf community in November is a ‘W’ signed over the stomach, I wish I could disagree with their assessment but every time I see a picture of myself I have to admit that it is my best feature ;-)

We rode back to New Life – the orphanage in whose guest house we’re staying this week and had dinner before discussing how tuesday would go.

Yesterday morning started with a devotional from Elizabeth – which naturally included scripture reminding us that ‘The deaf will hear and the blind will see.’ There is little doubt in the minds of those involved with this ministry that this scripture is being fulfilled right before our eyes. No, I’m not talking about deaf miraculously regaining their ability to hear. But without a doubt, this community of deaf people has heard the Gospel more clearly than many people with all five senses.

After breakfast here at New Life we hopped in the back of the truck for a ride out to the new community at Leveque. The ride takes about an hour total, but would take half that in the states. Traffic is terrible around Port Au Prince and the roads are worse, though half the Journey is made on one of the nicest roads in the country. The trunk we’re riding in isn’t exactly what we would consider a ‘full size’ in the states. Six people in the truck bed makes for a constant game of human Tetris as one person’s leg falls asleep and another person gets tired of standing. We get lots of interesting looks from the Haitians many of whom have no love of ‘Blanc’ or white people. But we arrived at the deaf community to cheers from our community members.

As we pulled up I was immediately greeted by several familiar faces who hugged me several times over. I was especially glad to see the community’s leader, Mackenson St. Louis. Right off the bat Kyle gathered up the interns from Mission of Hope who were facilitating another mission group from Minnesota. When we were all circled up Kyle prayed in sign language and Elizabeth interpreted while a Mission of Hope employee interpreted into Creole. Praying in three languages is always cool, but sign language is an especially beautiful language for prayer and praise. I have to mention to anyone who is reading – if you’re running camera for another church group and you see that another guy is taking video, it’s just common courtesy to stay out of each other’s shot. I’m talking to you, guy from Minnesota who thought the best vantage point was in-between the pray-er and interpreters. . . .anyway  . . .

Embedding the video didn’t work but please click here to check out a video of Mackenson praying.

After we finished the prayer the group from Frazer followed Mackenson up the hill to the location where the new church is soon to start construction. We prayed over that location – Keri prayed in english and Mackenson prayed in sign. I neglected to mention that when I arrived at the Atlanta airport on Monday Virginia Thompson, our pastor’s wife, called me. She had just gotten back from Haiti for a weekend trip and told me that she had tried to take a large stone from the future location of the church on the hilltop, but because her luggage was all carry-on, she wasn’t allowed to bring the rock aboard the plane. She called to ask me make sure and bring her a stone back in my check luggage for her. So I took this moment to find a large rock for Virginia. So, Virginia – your rock is on it’s way. 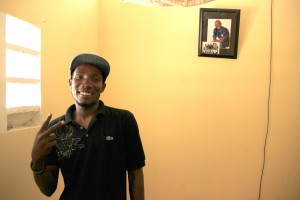 One of the coolest parts of the day was when William, one of the deaf leaders who one day hopes to be one of Haiti’s first deaf pastors, invited us into his new house. For me it was special because I got to see where he had hung the photo that we had taken on him in November with the Help-Portrait group and delivered in December. Before we left he shared a song with us. He writes songs and performs them in such a powerfully expressive way you could almost swear you hear the way the music sounds in his head. It was nothing short of awesome in the true sense of the word.

After looking around the new community at Leveque we got to painting one of the houses in the new community. The houses are all painted on the outside already, but the inside is still gray concrete. Painting may not sound terribly practical, after all you can live without paint, but when you’re light source is entirely based on sunlight coming through window vents, it’s pretty amazing how much different light colored paint makes in making a room brighter. When we walked in the room seemed so dark, even with mid-morning light beaming straight into the room, but when we finished the first coat by the end of the day it was sup rising how much more light there was in the room simply created by paint that reflected the light around the room.

Our first few hours painting were pretty chaotic as the children in the community wanted to help paint too. In addition to the kids there were the six of us, several deaf adults and a few pieces of ‘furniture’ to work around. After we got most of the coat done we decided it was best to get the kids out and make sure we were actually providing them with a decent paint Job.

Our lunch was back in the town of Cabaret (which isn’t far away from Chicago – again, musical theater joke) The food in Haiti is always enjoyable – rice and beans, chicken and Coke with real cane sugar – that may not sound like a big deal, but to those who have had it – they know what I mean.

Back at the community we finished up the first coat of paint. The team began to sing praise songs together and them moved on to disney songs. Alexis, one of the guys in the deaf community, had his hearing aid in so he could hear us well enough to laugh at us and sign to Mackenson “They’re singing crazy.” We finished up with what paint we had and at the end of what felt like a too-short day we headed back to New-life. On the trip back Kyle bought us some sugar cane while we were stopped in traffic. Most of us enjoyed it as we continued our game of human tetris – standing up when we could no longer feel our backsides, sitting down when we got tired of getting hit in the face by bugs. I have to say, I love riding in the back of the truck it’s a bit of a rush when our driver pulls out to pass a big truck only to miss a head-on collision by ales than ten feet. This is normal driving in Haiti and somehow they don’t seem to have accidents. It’s pretty remarkable.

I’ve even included a video via my GoPro of riding on the back of the truck in Haiti – click here to see it.

When we got back to New Life, a delicious dinner was waiting for us. The evening was restful and included some good time to process the day. Keri Ward is the only member of the team to not have been here before and both Kyle and I remarked on how quiet she had been on our way back that evening. She said she was just trying to process it all. One by one we all went to bed.

That catches you up to this morning! I thank you all for your continued prayers. It is truly awesome to see the progress as the community has moved out to Leveque and continues to develop together. Even yesterday as we were talking one of the deaf people kept saying ‘We must be patient. We must trust god to protect us.’ Their faith is always inspiring. 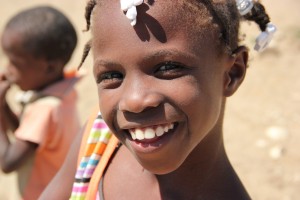