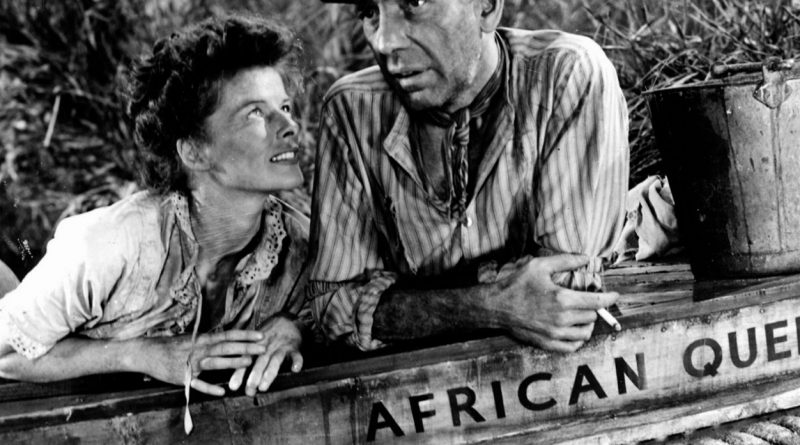 I’m Blogging through the AFI top 100 you can see the other entries by clicking here here.

The African Queen is number 17 on the top 100 and it is unusual in several ways. For one, it’s the first movie on the list that I’ve watched that is less than two hours. It’s also the first non-drama that I’ve watched. The movie itself was unique at the time of its release in that it was shot on location in Africa using technicolor cameras. Technicolor wasn’t new, but it was rarely use outside of the studio backlot since the process required larger cameras.

The movie starts in a Methodist Mission Church (yeah, for reals) in Africa where Audrey Hepburn and her brother are ministering to the locals. Humphrey Bogart shows up to deliver some supplies via his small river boat, the African Queen. He tells them that a war has started in Europe. Shortly after he leaves the Nazis attack and burn down the village. The tribesmen flee and Hepburn’s brother dies shortly after. When Bogey returns to find the village in ruins and only Hepburn alive he offers to give her a ride up river. Shortly thereafter Hepburn’s character suggests that they go on a mission to sink the Nazi boat on lake Victoria.

They embark on a journey to navigate a part of the river that had previously been deemed impassable by boat. In the process they have some conflict and eventually (of course) fall in love. Whatever else this movie is; an adventure, a WWII movie – it’s primarily a romantic comedy which makes it very different from everything I’ve watched up to this point. It’s great fun and I really recommend that you check it out if you haven’t watched it before.