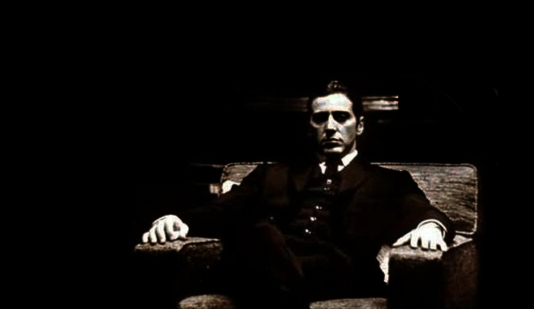 I’m Blogging through the AFI top 100 you can see the other entries by clicking here.

The Godfather Part II was the first successful sequel. Yes, bond movies had come before it, but we all know that the Bond films have virtually no connection to one another aside from their protagonist. This was the first movie that enjoyed enough success and left enough open to create a follow up, which many argue is superior to the original.

This also makes the Godfather Part II unique on the AFI list: it’s the only sequel to make the top 100. What is interesting to me is that despite the general assertion that part II is the best of the trilogy, the original Godfather is ranked higher. Originality is often given more credit in film value than over all quality.

The Godfather Part II has one issue for me. It is three and a half hours long. This meant that I couldn’t watch it in one setting. The reason for the length of the film is that it is essentially two films in one. The A plot continues the story from the first film, following Michael Corleone as the new head of the Corleone family. The B plot follows the story of the young Vito Corleone, the now diseased “Godfather” when he first came to the States and started his “Olive Oil Import” business.

The Story of Vito is pretty straight forward and, assuming you’ve seen the first one, you know how it ends up so while it isn’t uninteresting it lacks the raw drama that the story of Michael does, where we’re not sure who will go to jail, who will live, and who will die. Both are, of course, well acted, well written, and masterfully directed. I hope to never watch it again any time soon. I just heard from a friend last week that he watches the Godfather films every year. More power to him. I don’t particularly enjoy watching the decent of men further into organized crime. I believe that the appeal of the films to most men is three fold: Power – there is something interesting about watching powerful men who cannot be beaten that appeals to the average man. Family – father issues, dealing with siblings, murdering your brother-in-law – all things that men can relate to. And a third thing that I assume exists, but whatever it is it escapes me. But I’m sure there is something else that appeals which I’m not given to understand.