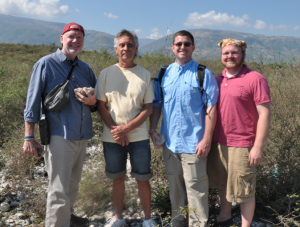 Today  marked the last full day here in Haiti, it started very early as Patrick, Butch, Michael and myself went out to take a look at one of the places were looking to possibly relocate the Deaf community. The land looks like a really good option, though nothing is certain yet.

The trip out and back to the land was a short drive, but a long trip because of Haiti’s traffic and poor roads – this is the single biggest challenge to anyone patience, though our team has never showed a sign of frustration toward it. I got to sit and talk with a young man named James. James is going to college and majoring in computer science. He speaks English really well and taught me several Creole words including the word for sweet, which is pronounced something like “doose” which is also used the same way it is in the States – to express that something is especially cool. Kyle Reschke and I have adopted the word for expressing our approval at something.

When we reunited with the rest of the group at the deaf camp we were excited to find that they’d made a great deal of progress on the Census. As soon as we got there Tara interpreted for a young man who wants to be a preacher. He said he reads the Bible but he doesn’t understand it all and he wants to be educated – it was a powerful testimony. 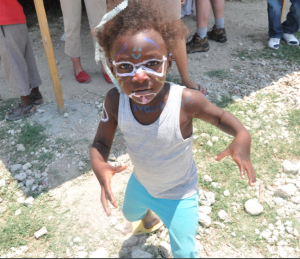 Anne Louise and Kaylee were hard at work in the deaf camp painting the faces of the children. The kids in the camp are so cute and they’ll walk up to anyone and just hold their hand or beckon you to pick them up. Several of the kids were ver fascinated by my equipment. Something that was funny to me was that even the youngest of them wanted to see every picture I took of them on the back of my camera. It reminded me of my nieces and nephews who did the same before they could form sentences.

The kids are so affectionate and trusting, its hard to leave them, but with the census completed and a thorough ‘orvwa’ said to all we climbed back onto our bus and left the deaf camp. As we were leaving a deaf man came up to the side of the bus and signed to robin. “I need a Laptop, a TV, anything. I’m married. I’m bored.” We couldn’t help but be a little entertained from the young man laying it out there. This did eventually turn into a real discussion of ways we could encourage community building and even entertainment within the deaf community.

In the afternoon we visited a church where we discovered they have a considerable ministry to the deaf already in place. This Baptist church would be considered a small to medium building in the road in the States, but here its one of the larger churches in the area. Walking into the church there was a sense of calm. Butch commented “It feels like Frazer.” We sat in their sanctuary and met their pastors then we went out into their courtyard and played basketball with some of the teenagers at the church. We met a few deaf folks that don’t live in the camp. Its exciting to meet future partners in ministry here.

Last night we enjoyed dinner here at the children’s home one last time and sat down with our team plus Margret and Tara and debriefed. It was clear that everyone was excited about the possibilities moving forward; moving the community, building them homes, getting them clean water, educating them, building them as a community, giving them fun things to do and building  them a church.

There is much more a could tell you, but I have to get packed. I’ll see many of you soon. Thanks for the prayers!